Home › Adventure › My Cup Runneth Over with Andean Condors

My Cup Runneth Over with Andean Condors

I think that almost every zoo I’ve ever visited has had an Andean Condor. It’s a huge and striking bird that displays well; it’s mostly black with a ruff of white feathers surrounding the base of the neck and, especially in the male, large white patches on the wings that vividly stand out in flight. The head and neck are dull red and almost featherless, and in the male, there is a wattle on the neck and a large dark red comb or caruncle on the crown of the head.

It’s a species that does well in captivity, if you define “well” as living a long life, not having to procure your own food, and being able to reproduce in a cage. Come to think of it, we probably all know at least a few people who would be just fine with living a life like that. For me, though, seeing an animal in a zoo compares to seeing an animal in the wild in the way that reading about the chemical properties of water compares to taking a shower under a cold, crisp and pelting waterfall. The former does little to communicate the exhilaration and richness of the latter. In the case of a condor, the metaphor is taken to the extreme.

The zoo exhibit for many animals is at least somewhat representative of their natural habitat. Not so with the Andean condor – replicating a mountain range is a tall order. In a case of implicitly admitted defeat for exhibit designers everywhere, the condor often is housed in a simple metal cage, seemingly not much bigger than the bird is itself.

In the wild, there simply is no other bird like it…the broad soaring wings in a 10-ft span…the sharp contrast of the white feathers against the black…the typically majestic setting of a sighting amidst rugged peaks high in an Andean mountain range…the deep spiritual and mythological links. Combine those with the fact that there are only about 10,000 (and probably declining) roaming the skies over its native South America, and it’s downright thrilling to experience one in nature. 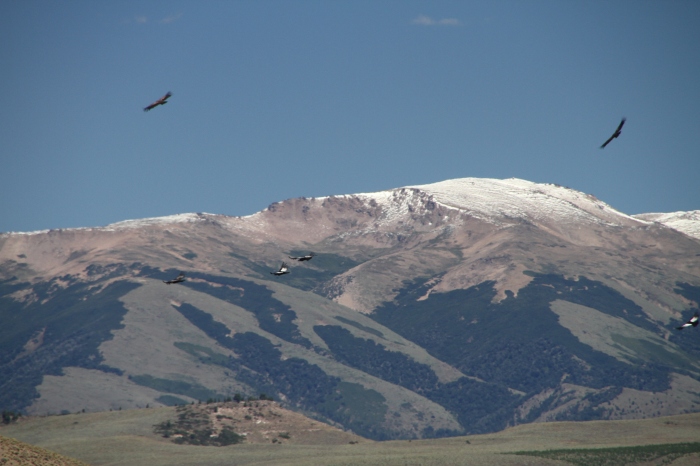 Condors in their typical habitat in Patagonia.

I had been lucky enough to focus my binoculars on one or two condors on a handfull of occasions in Ecuador, Peru, and Argentina. The memory that stands out probably was the sighting of one high in the sky over Machu Picchu, in Peru, just after a companion uttered the words “wouldn’t it be perfect to see a condor right now?”

The rarity of sightings, the cultural significance, and the adventure inherent in a typical encounter all set the stage for my realization that upon stumbling onto a large gathering of Andean condors, I found that I was more than willing to endanger fellow travelers for selfish gain when good birds were involved.

Several friends and I were driving south on the infamous Argentina-spanning Route 40 in the Neuquin Province in northwestern Patagonia, Argentina, on our way to the Village of San Martin de los Andes. We rounded a bend in the road and our eyes were drawn to a vulture-like bird swooping relatively low across the sky in front of us. Following its path, all heads turned to see a hillside dotted with the unmistakable and astounding sight of a veritable village of Andean Condors. 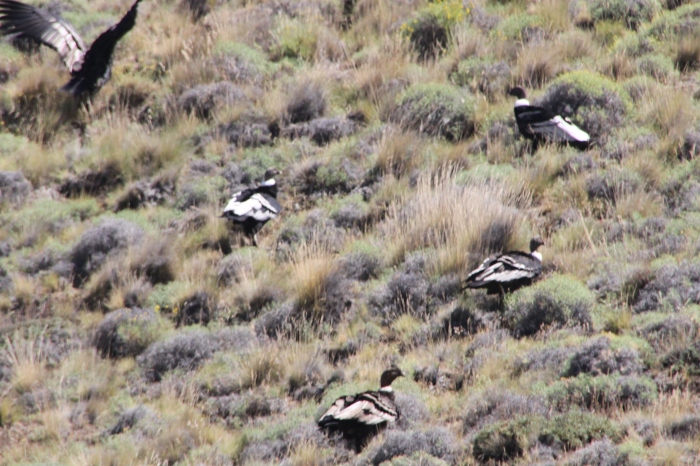 Like a reflex, “Pull Over!!” was ordered and complied with immediately, oblivious to the relatively steady traffic, winding road, and moderately fast speed. There wasn’t enough room between the road and a guardrail for the car but, the heck with other drivers, this was a birding emergency!

About 30 meters or so up a hill from the road, there was a bloated cow carcass. Around it were between 25 and 30 mostly adult condors. The condors noticed our presence, and those lucky enough to be at the front row of the dinner table stopped feeding, but stayed put. Now, having 30 sets of eyes belonging to an animal that feeds on dead things staring at me is not exactly something I need to have happen again. The stare down lasted only for a short while, though, as another car slowed and stopped; two men got out and for some reason decided the occasion justified trying to quickly get as close to the birds as possible. This is something serious birders never, never do. Well, okay, in all honesty, I’ve seen plenty of serious birders do this, but that’s a rant for another day.  The harassers had barely hopped a roadside fence before the condors started lumbering awkwardly up the hill, and finally all took wing.

As the majestic birds lifted into the sky, like shape shifters they morphed and in flight they entered the timeless dimension that is woven throughout the folklore and mythology of indigenous people of the South American Andean regions.

The Condor is the sacred spiritual bird in Andean Cosmology, which is the Andean way of understanding the world, and human existence within the world and the universe. Andean Cosmology is an uplifting and rich approach to life, and is as profound and complete as any of the eastern mystical systems. It has many lessons that have great potential for, and are desperately needed for, life in western civilization. It respects the earth, and its health promoting and healing practices are powerful and yet profoundly simple. Spiritual practice in the Andean tradition encompasses a way of reciprocity, gratitude, and healing in one practice.

The condor is symbolic of the upper world in Andean Cosmology. From his lofty perspective high in the sky, he sees the big picture of our world through spiritual eyes. Andean Condors live in and around high mountains and are closely linked with the Apus, or the sacred mountain spirits. If you “fly with a Condor” you can lift up your Spirit, and embrace a time of action and salvation through linking the physical with the spiritual in powerful ways.

So many condors in one frame…it’s ridiculous!

If you prefer more earthbound messages, the condor also is the ultimate representation of selflessness, because they don’t “take” for themselves, but consume what has been left over by other creatures, such as pumas or humans, that do the killing. When a condor appears in ones’ journey, pilgrimmage, or ceremonial celebration, it’s confirmation from the spirits and nature that one has good intentions and will be supported in their efforts. It also is symbolic of liberation, because the condor seems to extend little effort to fly – it harnesses the forces of nature to take him great distances and to great heights.

Adding to its significance, the Andean condor is a national symbol of importance to all of the Andean nations, Argentina, Bolivia, Chile, Colombia, Ecuador and Peru. It’s found throughout the Andes mountains and adjacent Pacific coasts of western South America, but its very rare in the northern Andes at this point in time. Habitat loss of land area needed for foraging and secondary poisoning from lead in carcasses killed by hunters, and worst of all poaching, have all taken their toll, and the bird is considered to be threatened.

The Andean condor is primarily found in open grassland and alpine regions up to about 16,000 feet (about 5,000 m), descending to lowland desert regions in Chile and Peru and over southern-beech forests in Patagonia. The condor is primarily a scavenger that feeds on carrion, and it prefers large carcasses such as those of deer or cattle. It reproduces at five or six years of age and usually nests on inaccessible rock ledges where it lays one or two eggs. It is one of the world’s longest-living birds, with a lifespan of up to 100 years in captivity.

The fact that condors do well in zoos actually has been helpful for efforts to bolster wild populations. Captive-bred Andean condors are the supply line for reintroduction programs that release birds hatched in North American zoos into the wild, in Argentina, Venezuela, and Colombia.

The northwest region of Patagonia is believed to have the largest population of Andean condors throughout its range, and our encounter not far from San Martin de los Andes was smack dab in the middle of it. We saw, in one sighting, about 10 percent of the 300 believed to survive in the area.

The sight of a lone condor soaring high in the sky will always be a spine-tingling treat. It will always serve to reengage me onto the spiritual path I strive for, and remind me of the healthy earth and civilization that dedication to the ideals of Andean Cosmology can bring about.

I’m also guessing that every time I see an Andean condor again, I’ll be transported to that sunny day on Highway 40 in Argentina when my cup runneth over with condors – secure in the file of my lifetime birding highlights.

To learn more about Andean condors and Andean Shamanism, check out:

A couple of previous Puma Diaries blog articles on related topics of Andean Cosmology and Shamanism were:

When Up Goes Under and Under Comes Up:  Time, Space, and the Current World Reversal in Indigenous Peruvian Thought. https://puma-diaries.com/2012/04/23/when-up-goes-under-and-under-comes-up-time-space-and-the-current-world-reversal-in-indigenous-peruvian-thought/

Like Loading...
‹ “I Blog for the Trees” and other “Deep Thoughts in Deep Snow”
The Ambivalent Tourist Town of Chachapoyas, Peru – An Off the Beaten Path Travel Gem ›