Home › Adventure › The Wondrous Glacier Perito Moreno, Argentina, Has a Chip on its Shoulder

The Wondrous Glacier Perito Moreno, Argentina, Has a Chip on its Shoulder

Me: Huh? What? Are you talking to me?

Me: Okay, okay, chill out man…er… sorry, I didn’t mean anything by that – I mean, is it okay to tell a glacier to chill out?

Perito Moreno: Just shut the f**k up and listen to me will you? You’re having an awesome time with your visit here, aren’t you….a numbingly, brain empty kind of escapism, isn’t that right?

Perito Moreno: I thought so. Another mindless tourist, ignoring the obvious. Well, get ready for my rant, human. Do you know while you sit there, reveling in my glory and conjuring up clever passages to describe me on Facebook, my “kind” are disappearing at an alarming rate? But instead of the guns, germs, and steel you use on your own kind, the messenger of death is global warming, and the higher temperatures and changing climate patterns that are resulting from it. Do you know that my distant relatives on the Arctic and Antarctic ice-shelves, in Greenland, the Himalayas, the Rocky Mountains, and even in my own mountain range, the Andes, are rapidly becoming shells of their former selves, or disappearing completely?

Me: Hey, I know something about all this. I’m a SCIENTIST you know. I read all about this, and I’m…

Perito Moreno: Yeah, big f**king deal, what are you actually doing about it? You humans like to think in selfish terms, right? Are you aware that the decline of my race is causing upheavals for your communities that depend on glacier melt water for freshwater supplies for drinking and food production, even as industrialist and fossil-fuel hungry humans caused the decline?
I know that I’m pretty amazing, but its only because I’m one of the lucky few…. I´m one of only three glaciers in Patagonia known to be stable, compared to several hundred others in retreat because there’s still enough snow falling on my ice fields to replace what’s melting on my leading edge.
You know all about luck, right? You’re an American “lucky” enough to be born in the most wasteful, resource-hungry and exploitative country on earth right? You were probably thinking about how much money you could make if you had a tourist company here when I woke you up.

Me: Hey I didn’t have any control over where I was born…do I need to apologize for that or what?

Me: Okay, okay don’t have a cow, or a calf, or whatever you glaciers have, I think I’m getting it….

Perito Moreno: You and I have a RESPONSIBILITY, you know? We have it good, but let’s not be numb and ignorant, like your 1% wants us to be. I know that global warming is still in its early stages and as it continues to get hotter, at some point I may start melting more than I can handle.

You should get that, right? I mean, with all those “austerity measures” being imposed on you by your government so that big corporations can keep getting record profits, your civil rights being eroded, social programs and quality of life stuff being cut, and all that….you ARE at least a LITTLE worried about tomorrow, right?

Me: They never talk about that stuff on the television.

Perito Moreno: Uh-huh….right.
I want to be around to lecture your grand kids, you know? Even better, I want to be able to toast with them about how we beat the odds and made the switch to clean energy and finally turned our back on the greed of the fossil fuel industry.
Get with the program here and like I said at the start of our little visit, wake the f**k up. Do more than READ about it. Look at your own life and your own carbon footprint and how much waste there is. And then DO something about it. Then look around at your community and SPEAK up. Then look at your country, and for Gods sake, don’t let the powers that be walk all over you. You READ about those climate rallys…how about GOING to the next one? You have kids, right? What kind of world are you handing them?

Me: Hmmmmm…..okay I think it’s sinking in.

Perito Moreno: Talk is cheap, let’s see some action. I want to be here tomorrow and so do you. Finish up this trip, and then do EVERYTHING you can on renewable energy initiatives, and do EVERYTHING in your power to turn humanity away from its current obsession with fossil fuels. No excuses, man. The world depends on action from all, be they biological or inanimate.
And then come back in a few years, and tell me about it. 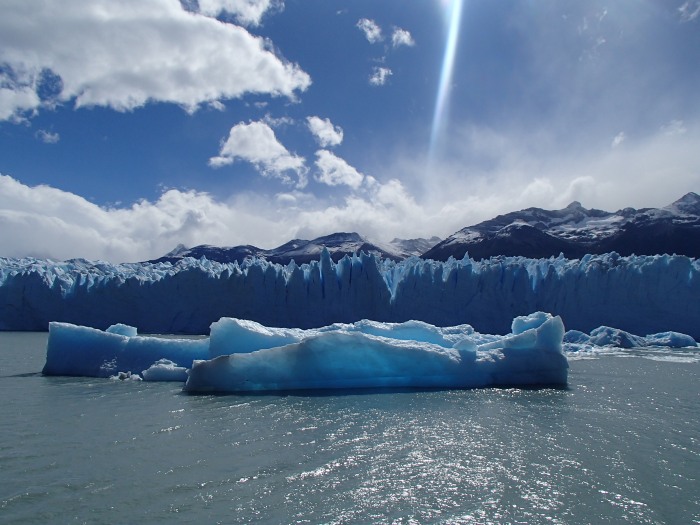 Unlike other environmental crises, the decline of the earths’ long-term ice cover is well reported by mainstream press. Words like “collapse” and “destruction” make good headlines, and the larger the retreat the scarier it sounds, and we all know how much the press likes to scare us. The decline has indeed been staggering. Ice chunks the size of U.S. states are being lopped off of Anarctica with alarming frequency.  It´s now believed that arctic summers could be ice free within 5 years.  The ice in Americas Glacier National Park will probably be gone by 2030.

Like so much of the climate change phenomenon, no one is very sure where all this will lead, and what changes to life on earth will result. Indications are, however, that words like “upheaval” will only begin to tell the story. Countries with low-lying shorelines like Bangladesh, or in the case of island countries like Palau and the Maldives, countries that are entirely low-lying, already are having to deal with disappearing acreage being claimed by oceans.   The Miami Herald already has reported that its likely southern Florida will have to be evacuated at some point.   New York City will have to be walled and below sea level if it´s around in a couple of centuries.  If current warming patterns continue, sea levels will rise somewhere around 3 feet by 2100, and up to 30 feet over the next several centuries.  If the ice on Greenland alone melts, sea levels could increase by up to 21 feet.

Populations ranging from major cities like Lima, Peru, to small indigenous villages are watching as their water supplies dry up. Scientists envision scenarios where the influx of freshwater from melting glaciers alters ocean currents, which in turn would lead to major climate changes – imagine northern Europe with no Gulfstream Current to warm it.

Perito Moreno is the focus of a thriving tourist industry, based in the Town of El Cafayete, the most rapidly growing town in Argentina. Moreno is the centerpiece of the Parque Nacional Los Glaciares National Park, the first National Park in Argentina and one of its’ most visited. The park is home to about 50 glaciers.

Visitors can experience Moreno in a variety of ways. There is an island in the lake at the foot of the glacier where the park has installed a zig-zagging walkway that provides views ranging from above to well down the face of the glacier. Boats trade back and forth in the water in front of the southern face, providing thrilling close views of falling ice. The glacier offers incredible adventure available to those willing to strap on the crampons. You can hike on the glacier in ways that range from 1-hour easy strolls, to highly technical ice trekking. 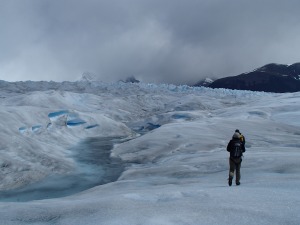 The wind and melting has sculptured the surface of the ice in a dreamlike myriad of shapes and forms. Some areas are gently sloped and rounded, while others give the feeling of walking narrow streets through tall buildings. Glacier guides are highly professional, and able to “read” the ice by sound, sight, and touch, to avoid fractures, hollows, crevasses. The greatest danger I felt was risk of sun or wind burn.

I disconcertingly found it a bit difficult to not experience Moreno without a looming sense of urgency….of seeing it while the seeing is good. There is just too much bad news with regard to warming temperatures and the state of the earths’ long term ice fields.

I was humbled and inspired by Moreno. I discovered though that visiting Moreno translated for me into a renewed commitment to do what I can to further lessen my carbon footprint and become more vocal and activist in my opposition to the fossil fuel industry. I also recognize that climate change is still in its early stages, and despite its current stability, there is no guarantee that Moreno won’t begin a retreat as temperatures increase further. Most likely, ensuring that Moreno will be around for our kids and grandkids to witness will take major changes in our energy policies and usage.

It’s true that there’s no way to visit Moreno without the burning of fossil fuel at this time. For those who make the trip, though, seeing this glacier is an up-close way for us to see firsthand what’s being lost, and that awareness makes it difficult not to be moved into action. The carbon footprint of the journey can easily be offset by many magnitudes if even a minority of the people who visit begin to practice and advocate for energy conservation and reliance on renewable energy.

In his book The Art of Pilgrimage: A Seeker’s Guide to Making Travel Sacred , Phil Cousineau writes: “If we truly want to know the secret of soulful travel, we need to believe that there is something sacred waiting to be discovered in virtually every journey.”

A journey to Perito Moreno doesn’t hide its lessons and discoveries…they are jarringly in your face, and there is no doubting its sacredness. In the majestic sunlight-reflecting folds and crevasses of its surface, and in the countless photographs documenting the shedding of every berg, you can find recorded a lifetimes-worth of reasons to do everything you can to head off global warming.

The consequences of global warming on glaciers and sea levels.  http://www.nrdc.org/globalwarming/fcons/fcons4.asp

Like Loading...
‹ Colonia Carlos Pelligrini, Argentina, Reinvents Itself as a Model for Sustainability Based on Ecotourism
A Quest for “Nature” in Uruguay ›