Home › Nature › Prances With Boars – Jogging Through a City Park in Vienna, Austria

Prances With Boars – Jogging Through a City Park in Vienna, Austria

Did you ever wonder how compatible wild pigs would be with sunbathers, rollerbladers, street performers and vendors, joggers, bicycles, flower gardens, games of volleyball, and all the other goings-on that define a city park?  Well, I hadn’t either, but I was faced with just such ponderings while jogging in late summer through Lainzer Tiergarten, a huge park within the City of Vienna, Austria. 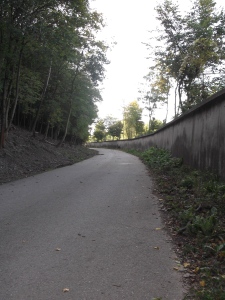 It was the walls that gave me the first hint that the run I was about to take would be a tad different….there was nothing subtle about those walls.  I mean, it’s a park within the boundary of a major city, and there are 7 to 10 foot tall stone walls – 14 miles of them – that seal the park in and the city out.  I’ve seen plenty of smaller city parks with iron fences around the borders, but nothing with the brooding mysterious personality of those walls.  Haunting scenes, in black and white, from movies like “Edward Scissorhands” and “Young Frankenstein” swirled in my head before I even touched the handle of the thick wooden door to enter the courtyard of the castle of doom…..I mean….the large expanse of carefree pastoral preserve. 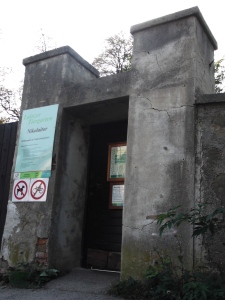 The entrance, a gateway to adventure…

Signs posted to the side of the door specified that no dogs or bikes were allowed in this….”park”?  The plot thickened.  Once inside the door, there was a pleasant enough small wooden building, a paved path, and a couple of modern-styled kiosks proclaiming – entirely in German – the wonder and glory of this biosphere reserve park.

My friend and I started our run as soon as we hit the path that exited the greeting area, and I immediately realized I hadn’t seen forest like this in all my many years as a naturalist in the Americas.  The trees were very tall, and most were quite large in diameter; chestnuts, oaks, and maples were some I could identify.    They were well-spaced, and the canopy was high above the ground, and extremely dense.  No sunlight seemed to find any openings in that canopy to spread its warmth directly onto the forest floor.  And other than that…..nothing.  There were almost no understory trees or shrubs, or wildflowers, ferns, or grasses on the ground, and there were decidedly no flower gardens.  There were last year’s dead leaves intermixed with areas of dirt that seemed freshly churned by a really efficient high-horsepower rototiller.

It wasn’t long before I sensed, and then observed, shadows lurking in what seemed to be the darkest areas under the deepest overstories.

My jogging partner pointed out to me, quite matter-of-factly…”oh look, there’s a boar.”

Why, sure, OF COURSE it was…. isn’t EVERY every urban park in every city in the world overrun by wild pigs?

Well….no, they aren’t, and having read more than my share of Outdoor Hunting magazines in my day, my imagination kicked in rather quickly.  Soon I was convinced that ill-tempered, razor-tusked boars, sensing that I wasn’t in my best jogging shape, were lurking within each dark grove we passed, poised to charge me just for the sheer wicked fun of it.

But as I ran, watched the boars, and interrogated my friend for her experience with these animals, I learned that in the daytime the boars tend to keep to the shadows with their noses firmly in the dirt.  They were clearly the reason that no plants had soft parts anywhere near the ground, and were the explanation for all the plowed up soil everywhere.   Wild pigs are reknowned for the damage they do to land by eating both above and below-ground parts of plants, exposing bare soil and causing erosion.

A boar had lunch here.

It wasn’t long before I felt a bit silly at my uneasiness.  After passing a number of lone elderly women, teens with their noses glued to their ipods, and kindergarten class groups, I concluded in scientific fashion that it was unlikely that the disappearance of any Viennese citizens had, at least recently, been attributed to attacks from roving, out-of-control gangs of wild pigs.

I did have one uneasy encounter while jogging alone during the late morning one day when a large sow with eight piglets (boarlets….?) crossed the path in front of me with only half her caravan.  I slowed to see if the rest would cross, and when they didn’t I decided to pass them anyway.  She froze in her tracks only 20 feet from the road and eyed me intently as I trotted by.  I determinedly avoided making direct eye contact with her or making any deviation from my plodding normal stride – not wanting to give her any idea that I was even the slightest threat to her family, despite my heavy breathing.  As soon as I passed, the other four piglets crossed the road….I’d swear they had smirks on their wrinkled little faces.

The tranquil atmosphere of peaceful coexistence, however, changed significantly at dusk.  The park officially closes before sunset and all entrances are locked.  Some joggers are inevitably locked in, and I learned that it’s not that big a deal to scale the rock walls and slither down the outside.  My jogging partner and I pushed the envelope one evening well after the sun had set, to the point where the forest was dark and the clearings barely lit by the dimming twilight.  It appeared we were the last of the human stragglers in the park.

Right about then, it became obvious that at least one reason the park closes at night is that the boars take over the entire place.  As the light fades, more and more emerge from the shadows, in larger and larger groups.  They gradually ease closer to the paths and roads, and at some point in time, no doubt triggered by some signal from the king and queen boar, the boars stop yielding to you. 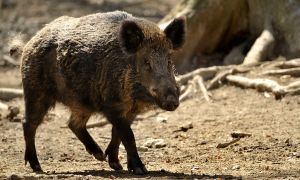 They also appear to stop ignoring you, no doubt because there is so little else for them to eat in the park, and they begin to look you over like you would eye a Christmas ham fresh from the oven, all garnished with pineapple slices and cloves.

And that’s an analogy I would only use safe on the outside of the walls, probably only on the other side of the Atlantic ocean… and even then only in the daylight.

My encounters with the boars inspired me to learn more about these particular inhabitants of Lainzer Tiergarten, which is part of the greater Wiener Wald area – also known as the Vienna Woods.  The park is just under 10 square miles in size, and the population “target” of boars within the park, as set by Park Managers, is about 600 boars.  Of course, the boars breed profusely, and the population more than doubles every year.  They are native to the area, and their natural predators are wolfs, bears, tigers, all of which are long gone from the Vienna Woods.   There is no way the habitat in the park can sustain feeding by this many boars.

The solution to this overcrowding is one that allows the park to maintain a reasonable population of these animals, and provides revenue for the city.  On two occasions every year, the park is closed for a short time to the public and opened to private hunters who pay between 2,000 and 3,500 euros each for the privilege of shooting a boar….and they have to pay more if they want to keep the meat!   Most, though, undertake this adventure purely for the trophy, and the meat is usually sold to resellers or to restaurants.  In addition to these two private hunts, there also are professional hunters working for the City of Vienna who take care of the remaining animals needed to control the population.

Even when maintained at target levels, boars cause plenty of damage to the vegetation in the park.  The only trees that have a shot at surviving are those inside of reinforced wire cages or fences.

Keeping the boars away.

As far as human-boar interactions, I learned that the boars may occasionally chase people a little bit…but there are no attacks really.   Based on the rules prohibiting dogs, bicycling, rollerblading and such in the park, I suspect that restricting human activities to those that are relatively sleepy, like jogging and walking, may be the key to successful co-habitation with the boars.

I was told that Vienna has more parkland per unit area than any other major city on earth, and I had no problem with the idea that I needed to head to a different park for my game of volleyball or to strap on my rollerblades, if I was so inclined.  I took a great deal of satisfaction in learning there are parks like this in the world, and in having had the unique (for me) experience of jogging past, though, and around the boars of Lainzer Tiergarten.

Like Loading...
‹ Paddling an Unnamed River in the Wilderness of Labrador
Canoeing the Wild & Scenic Rio Grande River – A Wild West River Adventure ›