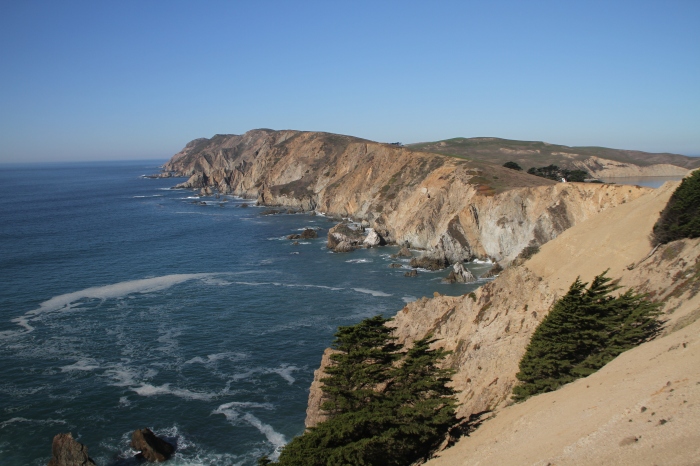 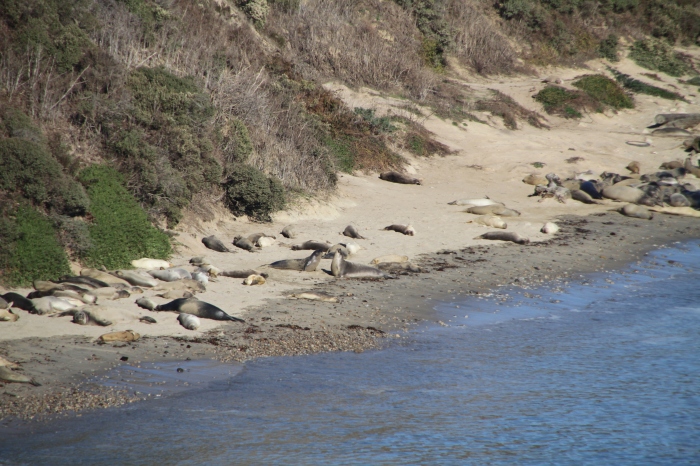 Encounters with folks at wildlife viewing areas often are good things.   You get anything from just a smile and a nod, to some small talk, and every once in a while you pick up a tip from a local about another good spot to see wildlife.  As he approached, I instinctively made a quick assessment.  He was somewhere in that late middle-age, early old-age span, and had a somewhat disheveled appearance;  a little like David Crosby of Crosby Stills & Nash, in his later years with longer kinky hair and a mustache.   He wore a hooded sweatshirt, jeans, and beater sneakers.  All he carried for gear was an inexpensive pair of beat up binoculars.

We exchanged a quick “how you doing”…the usual… and he smiled a warm and a peaceful smile.  We watched the seals and scanned for birds in the water below for a while.  I broke the silence and asked if he’d like to look through my spotting scope for a closer look at the seals and seabirds.  He smiled, and said “no thank you, these binoculars are fine.”  We were quiet again for a while, and went about our birding business.  I broke the silence again and asked him if he knew about the different species of loons that were around the area – we had two species below, and others could be in the area.  It was immediately clear the guy knew his birds, and also that he knew a lot about Point Reyes, and he was a regular visitor there.    In a friendly, happy-to-share way, he gave me a lesson in Point Reyes birding.  I was pleasantly surprised, and maybe a tad guilty of having made a judgment based upon appearances.  It’s not hard to fall into this in and around the birding community.  He didn’t have any of the trappings of many of the people you come across that are either an authentic, or wanna-be, serious birder.

We watched more and chatted a bit more, and I once again asked if he was sure he didn’t want to look through my spotting scope, which I was sure provided a view far closer and clearer than with his binoculars.  “No thank you”, he replied, and he smiled the same smile, “these are fine.” As so often happens in encounters like these, no names were exchanged.  After a few more minutes, we bid each other a good day, and he left to go back to the parking lot.

I watched the seals and loons a bit more, then I also left to go find another spot to look at wildlife in some other part of Point Reyes. I got to the parking lot, and the man was at a small older model sedan fumbling for something in his trunk.  I put my gear away and started to get in my car, but at the last second decided to walk over to see if he could recommend another place to go.  He readily gave me the scoop on other good spots.  I asked for clarification about his directions to one of the spots, and he told me he’d be happy to lead the way to the spot….he had the entire day to spend at Point Reyes.

It turned out that his name was Chris, and he had a Ph.D. in Philosophy from the University of California at Berkeley back in the early 1970’s; but he went only to be part of the scene, and he never worked in anything related to his degree.  He currently lived in San Francisco in a shelter, and he did carpentry from time to time.  The car was borrowed, and as often as possible he would visit Point Reyes to bird.  He had very few possessions, and claimed to never use a computer or any other of the modern technological toys. Chris was extremely knowledgeable about all forms of current events.  Whether it was politics, world events, economics, the environment, or social movements, just like with the birds of Point Reyes, it was very apparent he knew his stuff.   His knowledge was far deeper than what was reported on the evening news and in newspapers, and it also was very apparent that he didn’t automatically accept what mass media had to say, and worked to uncover and understand truths.

Every once in a while, I would chip in a thought or question and in a completely non-judgmental and humble fashion, Chris would matter-of-factly explain to me why and what he understood to be the realities.  His insights were staggering.  Even when he spoke in what some people would say was disparagingly fashion about politics or politicians, he did so with no anger or resentment.   It was what it was.

We hiked a fair number of trails and visited a number of key birding spots; the birding was good, but being the afternoon, it wasn’t fantastic.  Except when we were discussing the most serious of world events or climbing a steep hill, Chris usually had the peaceful smile on his face.  When we did encounter a bird species I hadn’t seen before, he’d help identify it if I needed it, and tell me where else I could find it.

After several hours, I looked at my watch and I told him it was time for me to hit the road.  I was traveling without a schedule, but my mind was on the future and the time I allotted for Point Reyes was up.  So I had to move on.

I believe Chris would have been quite willing to keep going.  He was taking the day as it unfolded – being in the moment and in the experience.

He made sure I knew exactly where I was going, and how to make it through San Francisco so I wouldn’t get caught in traffic.  He gave me excellent directions. I thanked him for the “guided tour” he had provided me, and shook his hand.   We never traded full names.

Chris never did look through my scope, or show any interest in my expensive camera and binoculars.

I drove away, my mind firmly on my next destination, and thinking about the traffic I would encounter in San Francisco.   In other words, I was everywhere but in the moment.

As I drove south into and through San Francisco and the hours passed, my mind began to race with all the lessons that had been dropped on me, and appreciation started setting in.  His friendliness, simplicity, and humility.  His satisfaction with his few belongings in this world and his lack of coveting.  His peace with who he was, and his peace with the world.  His lack of materialism and consumerism.  His interest and effort expended on being informed.

Now I’m not the least bit religious, and in fact my opinion of the role of organized religion in this world would upset many a pious soul, but before long the experience morphed into a downright hallelujah episode, with Chris representing an angel sent just for me, to provide me with some midcourse corrections in my life.  Of course, I quickly decided it was all about me…I mean, I didn’t exactly have it all figured out just yet….

I kicked myself for not getting his full name.  I realized quickly though that I probably couldn’t have reached him if I wanted to, and I concluded that I wasn’t meant to have his name anyway.  I was meant to meet Chris, get some hints about the path to enlightenment, and then go on my merry way.

I look back upon that visit with Chris as a turning point in my life.  The processing that followed motivated me in what I feel to be many positive directions.  I’ve worked to become better informed about the world around me; I resolved to dig deeper and ask questions. Chris nudged me down the path of anti-materialism and anti-consumerism. I divested myself of many things and minimized purchases.  I still have some toys – I held onto my spotting scope and camera – but I choose to do without the latest bells and whistles, and I value what I have much more.   I have to work at it sometimes, but I recognize when my mind takes me out of the moment and into the future, and I work to nudge it back to the present.  I try to give my full attention to whoever I am with  and whatever situation I’m in.  Humility is a way of life to always strive for.

Yes, the chance meeting with Chris has become symbolic of many things for me and has had a huge impact on my life.  Exactly what I needed when I needed it.

Chris I am quite certain saw the whole experience very differently. To him, it was just a fairly slow day of birding.

I’m sure I won’t meet Chris again, but if I could I’d tell him it was good to see him.  I’d keep it simple, look for birds, and appreciate them quietly.  I’d welcome any and all chats related to current events.

But I wouldn’t offer to have him look through my spotting scope.  I’m sure he would ask if he wanted.

Like Loading...
‹ The Galapagos Islands – On the Beaten Path
Paddling an Unnamed River in the Wilderness of Labrador ›