Home › Culture › Vieques – Under the Surface

Vieques – Under the Surface

Some travel destinations have so many choices of activities that it becomes a stress just deciding what to squeeze in.  Well,  Vieques isn’t one of them.  Other than sipping tropical cocktails or Medalla cervesa, all things “Vieques” lead in one way or another to its’ beaches.

The tourism web sites and books explain that Vieques is an island located in the Caribbean Sea  a few miles southeast of Puerto Rico, about 21 miles long by 6 miles wide.  You’ll read that it’s an undiscovered paradise with incredible beaches, and that you’d better hurry and visit before everyone else hears about it.  Visit and you’ll be enchanted by the uncrowded and unspoiled white sand beaches, the abundance of watersports, the top quality fishing, and the laid back charms.  It’s a prime honeymoon destination, maybe one of the hottest in the Caribbean.  The Bioluminescent Bay on Vieques  is one of the wonders of the natural world, and paddling in the bay on a moonless night will leave you breathless in amazement at the plankton that glow when the water’s agitated. Large areas of the island have been set aside as preserve, so it has something special. 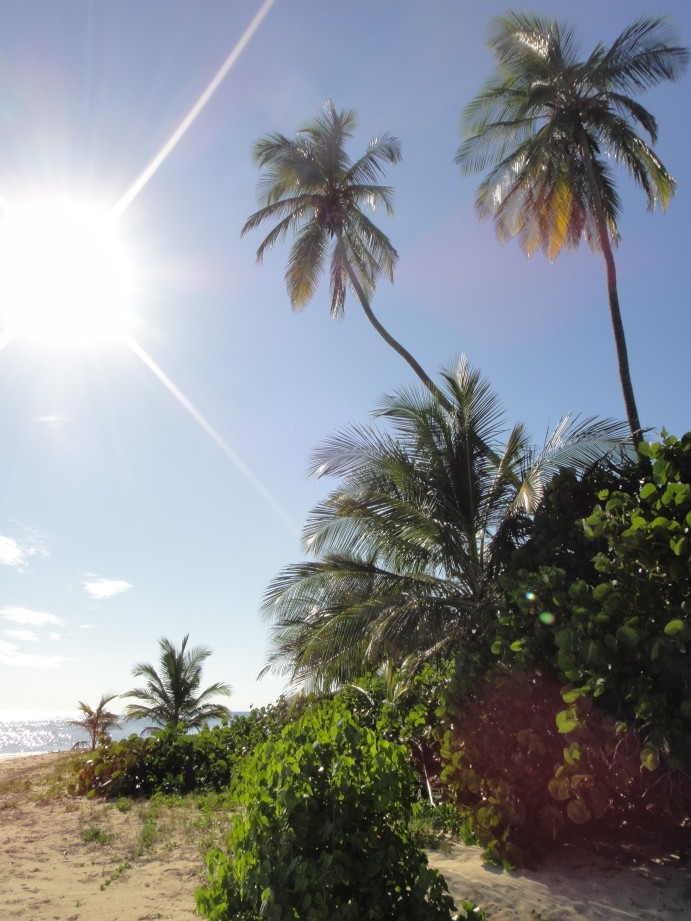 And that wafer thin surface gloss will summarize the impression, and satisfy the need-to-know, for  almost all visitors to Vieques.

But there’s an extremely engaging story to be told about Vieques, and there are layers of social and environmental injustices to dig through, all of it intricately woven with the government of the United States.   This is a place where Americans in particular can learn a great deal about their own country.  Words like “social injustice and abuse, and environmental degradation” begin to flesh out the story of Vieques.  And the words undeveloped, natural and unspoiled can only be applied if you truly enjoy sarcasm or view it through the blindest of eyes.

Around 1950, the United States government decided that Vieques was a great place for a bombing range and weapons depot in its plan to create a large base of operations in the Caribbean.  With this in mind, it uprooted a large portion of the Vieques population, often harshly, and claimed 75% of the island.  For the next 60 years, the U.S. Navy, and a number of other “guest” countries, shelled the Vieques hills, reefs, and beaches with a variety of bombs, deployed troops and machinery for training, and used other portions of the island for ammunition storage and dumps.

But Vieques wasn’t an isolated and unpopulated atoll in the middle of the ocean.  It was home to a sizeable population of Viequensies who didn’t benefit from the Naval presence because there was no “base” there, no employment for the locals at a base, and no sailors to spend money.  There also wasn’t enough access to the islands’ land and water to grow or catch enough food to feed themselves.

There are documented episodes from this period of time that are tough to sugarcoat, and which don’t reflect well on the U.S. or the Navy; you can read more about that if you’re interested in the list of suggested reading at the end of this.  Over time, unfortunate events like a bomb being dropped in a parking lot by mistake and killing someone, peaceful protestors who were arrested and inexplicably murdered in jail, and fishermen in small wooden boats taking on Naval ships and disrupting training activities, helped to push Vieques into the spotlight. In the late 90’s and early 2000’s, Vieques became a bit of a celebrity cause when high profile activists like Al Sharpton and Jesse Jackson, professional athletes, and Hollywood actors joined the protests to help end training activities.

The Clinton administration put an end to the bombing in 2003 and made decisions on how the “Navy 75%”  of the land was going to be used.  Some was given back to Vieques, some was kept by the Navy, and the majority was designated as wildlife preserve, under the jurisdiction of another U.S. Federal agency – the U.S. Fish & Wildlife Service.  Most controversial is the eastern portion of the island, which is an off-limits preserve—mostly because there are unexploded bombs and hazardous wastes there.  Some are concerned that this preserve is just a cop out for proper cleanup, or that the area is just being saved so it could easily be retaken for use by Navy.  On the flip side, cleaning up unexploded ordinance is extremely difficult and expensive, as well as disruptive as hell to a natural environment, and although it probably should be done, letting nature have its way for a while may not be the worst option….great egrets and brown pelicans tend to tread lightly.

Fast forward to Vieques in 2011; on the surface there is that special kind of beauty you get when you have turquoise ocean, white sand, rocky headlands, and no hotels or houses in the viewfinder.  Business is good at the hotels and restaurants, a handful of new hotels and houses are going up, and visitor numbers are increasing.  The ammunition bunkers are tourist attractions (although I passed on checking them out).   The Bioluminescent Bay is getting the attention it deserves as a world class attraction.  On the night I visited, there were plenty of kayaks and boats in the Bay, and the voices of guides carrying across the water sparred throughout the ring of the Bay, their words describing dinoflagellates, constellations, prevailing wind patterns, and the future… spoken with Viequensie pride.

The legacy in 2011 of 60 years of Navy occupation also includes contamination in the form of heavy metals, depleted uranium, explosive residues, unexploded ordnance and artillery shells, and areas still contaminated with toxic waste.  There also are lingering health problems, including high cancer rates, which help Vieques to still be in the news from time to time.  Within the last two weeks, the U.S. Department of Health and Human Services released a review that confirmed a conclusion reached by the agency in 2003 that heavy metals and explosive compounds in the island’s soil, groundwater, air and fish pose no health hazards. The agency conceded though that “limitations” in the information made it hard to interpret research that has found a higher incidence of chronic diseases like high blood pressure, diabetes and cancer in the island’s population by comparison with the rest of Puerto Rico. There is an article from the New York Times referenced at the end of this article where you can read more, including comments from those who dispute the validity of the Navy study.

The realities of history and the choices of present day produce differences in opinion among both natives and expats.  Beaches?  The Navy renamed many of them around the island, keyed to help with training; there’s blue beach, red beach, green, and so on.  In doing so, the beaches lost a link to the past, and many think names should be changed back.  But others, like Eric, a Viequensie who owns Bieque EcoTrips, strongly believe the names should remain as the colors now, because the Navy occupation also is part of the history of Vieques, and it should not be ignored or forgotten.

The large area dedicated to Fish and Wildlife preserve?  Developers and current business owners see the potential to market it as an unspoiled paradise.   Locals, however, see land that wasn’t returned to them, and which they can’t farm or build their own houses on.  I have to wonder, if the land was opened up, would it go to the natives or be with them for long, or would developers and relocating foreigners have it in the end?

Without diminishing the hardships of residents, and the environmental impacts, there is an obvious somewhat special gift that resulted from the Navy occupation:  the over-development that ravaged  the rest of the Caribbean skipped Vieques –which explains all that “undiscovered” baloney in the tourism ads.

It’s one of the great ironies of our natural heritage—some of the best preserved lands left in the world are those that have been restricted from public access and development because of their designation as land used by armed forces. Our Department of Defense has done more than protect us from belligerent nations—it’s protected us from developers!  On Vieques, there’s a well-marked fence around the large area where there are unexploded bombs.  I wonder if there’s any better way to keep people from being a royal pain in the ass to nature?

There were tough decisions made on Vieques; it had a challenging several hundred years, but the island does have an opportunity now.  It’s an opportunity that’s been squished by heavy development on almost all other Caribbean islands. Vieques has a chance to apply principles of sustainable development, and institute practices that highlight and preserve the natural areas on the island—those accessible and those that may never be.

There seems to be some promise that things may be on a positive track on Vieques.  Whether it’s due to the economy of the last 5 years or so, or the determination of locals that came from 60 years of fighting for what had been theirs, development seems under control.  Ecotourism is off to a pretty good start.  The tours of the Bio-Bay all emphasize how sensitive it is, and how serious they are about treating it right. There’s even talk about blocking the lights from homes that can be seen from the bay to control light pollution.  The mountain biking is great for a Caribbean island.  There are miles of gravel and sand roads in the wildlife preserve that are accessible,  and there are tons of beaches to explore, most of which were empty when I visited in late December. Trails and roads peddle through dry coastal forest in uplands, mangrove swamps in lowlands; you smell tropical smells, feel tropical breezes and heat, and see plenty of tropical birds.  I also did some paddle boarding in one of the many protected bays, and explored mangroves and isolated beaches.  I can recommend all of it. 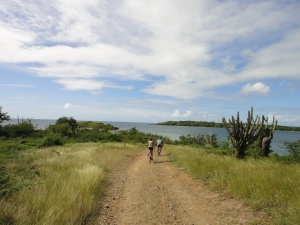 It’s enlightening to look at the many “beautiful and uncrowded” beaches of Vieques and know, however, that they decidedly are not unspoiled. There’s social and environmental damage to be repaired here, and your vacation dollars help…in particular if you can shuffle them the way of Viequensien businesses, as opposed to the large number of gringos who have headed here and started businesses with American pricing and attitudes.  Consider seeking out a local, who can tell you  the history firsthand, and whose eyes light up with their passion for their beautiful island.

On my trip off the island, I drove past a great view visible from a hill entering the capital town of Isabel that looks over the unbroken green and blue of the eastern half of the island.  Then, from the ferry over to Puerto Rico, I looked back and saw the whole island lengthwise from the north…..green on the left, developed in the middle, and green on the right.  It struck me as a unique pattern, and somewhat symbolic for a people sandwiched between a difficult past and a promising future.

Gerald Singer.  Vieques, An Illustrated Guide to the Island, its History, and its Culture.

Like Loading...
‹ Adventures on a Cross-country Road Trip With the Playlist on Shuffle
Hiking Salkantay in the Clouds of Peru: A Gift Wrapped in Silver Ribbons ›